Skip to content
Last Updated August 20, 2020
GoShindig is reader-supported. When you buy through links on our site, we may earn an affiliate commission. Learn more

For a hamburger to be a hamburger you have two essential ingredients – a burger and a bun. So picking the right bun for your burger is paramount to producing a top-quality hamburger. So what is the best bun for burgers? Thankfully we have a great choice of quality bread to pick from. And below we list our favorite burger buns.

Unfortunately, picking one bun as the best bun for burgers isn’t easy. It all depends on the toppings, sauces, cheese, and size of patty you plan on using. But I have listed the best burger buns in order of my personal preferred preference. 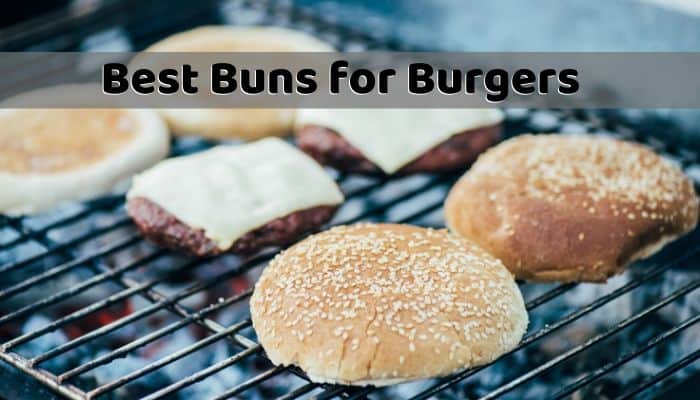 This classic burger bun is given its name because it has potato flour or potato replacing some of the regular flour. And because of this, when you cut open a potato roll you’ll see a slightly yellow colored bread. But the reason adding potato to a roll makes it great for a burger bun is that it makes it a little firmer than a standard white bun.

Potato rolls are soft and squishy with a sweet taste. They hold up well with juicy burgers, and when toasted can handly juicy burgers and lots of sauce easily, no worries about them falling apart in people’s hands. Martin’s Potato Rolls would be my recommendation here.

A burger with a brioche bun is a more grown-up hamburger. Potato rolls are a family favorite due to the sweet taste the kid’s love whereas brioche buns have a rich flavor for the adults. This rich taste is because brioche buns are made with a high amount of egg and butter. It is also the bun I see win most Facebook and twitter polls for the best burger bun.

English muffins have always been used for savory sandwiches, yet people are still often dumfounded when you say they make great burger buns. They are rounds, sturdy and when toasted they add an amazing crunch to the burger.

Sesame seed buns are generally plain buns with sesame seed thrown on top. But in theory, you can add sesame seed to any bun and I have seen them added to brioche buns. Having sesame seeds on a bun is a classic look for a hamburger, and other than a little extra crunch that is pretty much all they add to a burger. How food looks is important to many people, so sesame seed buns are a great choice if you’re looking to make a stunt burger for Instagram pictures.

With a fluffy interior for soaking up juices and a hard exterior to hold everything together, the kaiser roll is a great choice for a burger. It doesn’t have much in the way of flavor, so it’s up to the burger and toppings to do all the talking. But this bun/roll has been around since the 18th century, and food only survives that amount of time if people really like them.

A square or rectangle bun for a burger? It sounds strange but with the right topping having a ciabatta hamburger does work. This bread selection came about with the explosion of higher-end burger joints. To stand out in the crowd many restaurants were putting their own twist on the classic burger. And one of the easiest ways to stand out visually was to use an unusual burger bun. Some, like the ciabatta bun and our next selection, the pretzel roll, succussed and have stuck around while other choices faded away.

The pretzel bun is another popular selection born out of the artisan and craft burger crazy. It is another tough bun that can stand up to the juiciest of toppings and burger. These more robust burger buns do have one slight negative point – often when you bite down on one end the bun squishes the contents out the other end. So although these buns can hold up to having a mountain of toppings it’s best you keep it simple if you use pretzel buns for your burgers.

There are plenty of ways to add onion to a burger, as discussed in our best onion for burgers guide, and adding onion to the burger bun is another great option. The classic onion roll has Jewish origins, but today onions can be added to a number of different roll styles and are best with sweeter buns.

Probably the world’s most popular bun is the plain white roll. Everyone has eaten one. Normally this bun is best with cold cuts or cheese as it’s too light and fluffy to hold up to the liquids from a burger. So if the plain white roll is what you want with your burgers it’s best you toast them and add barriers like lettuce or cheese on the buns to stop the juices leaking in.

The memories this “burger bun” style brings back. Often called home hamburger or in my childhood home, Dad burgers. This is the bun of choice for people too lazy to go to the store, or too cheap to buy burger buns. If you are desperate a couple of slices of bread does the job, just make sure you eat them as fast as possible because it will break about as soon as the juices soak in.