Thinking of the earliest picnics will evoke all kinds of wonderful imagery in your mind. But how far back can these thoughts lead and what exactly is the origin of picnic which we know and love?

Personally, I like to imagine a couple at the start of the last century. The gentleman in his finest tailored suit. His beau in her most splendid dress with matching bonnet and lace gloves. They are in the countryside with their picnic hamper eating and drinking to their hearts content upon a plaid picnic blanket. 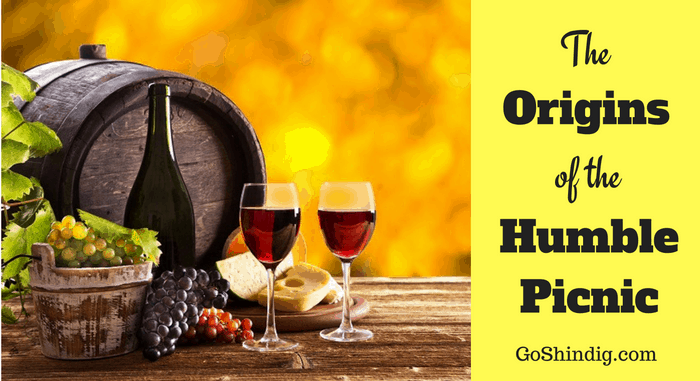 Going back further it’s exciting to conjure up ideas of medieval feasts that took place outside and enjoyed by everyone. Maybe there was a hunt and they were able to stuff their bellies with the catch of the day. Or maybe there were jousting tournaments where families joined to cheer their knight before coming together to eat as one. 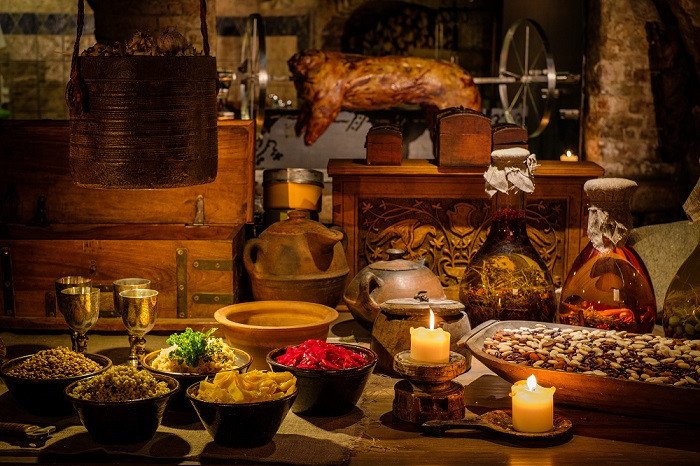 What we know for certain however is that the word picnic originated in Europe in the mid-nineteenth century. This more than likely in France. The words pique and nique would over time become the modern equivalent. Meaning to pick at something small and unimportant it primarily described people coming together to eat in restaurants who would also bring their own drinks. They were literally the first BYOB (bring your own beer) restaurants.

But accounts of similar practices date back even further. Accounts exist of English in the 14th century, French around the same time and Greek gatherings dating to the 5th century. They all have similar attributes, however – a group of people would join together and each provides a contribution of food which the community collectively enjoyed. In the most part, this would be an indoor activity. The picnic’s origin, as we know it, emerges when these feasts relocate to the outside.

The picnic seems to have started in this guise as a pastime of nobles. Indeed, the original meaning of the picnic hamper, or hanapier in French, was goblet carrier. Over time though, like many things, the practice swept through all classes with each bringing their own unique twists to the ever increasingly popular activity. The nobles used the finest picnic cutlery made from China. The less well-to-do would settle for finger food and some hearty ale.

Origin of Picnic – in Text

In the widely renowned Mrs. Beeton’s Book of Household Management, a true authority of everything needed to run a Victorian kitchen, we get to glimpse at what constituted a quintessential picnic:

“A stick of horseradish, a bottle of mint-sauce well corked, a bottle of salad dressing, a bottle of vinegar, made mustard, pepper, salt, good oil, and pounded sugar. If it can be managed, take a little ice. It is scarcely necessary to say that plates, tumblers, wine-glasses, knives, forks, and spoons, must not be forgotten; as also teacups and saucers, 3 or 4 teapots, some lump sugar, and milk, if this last-named article cannot be obtained in the neighborhood. Take 3 corkscrews.”

The pomp and ceremony behind this are undeniably British to the core. This reflects the absolute golden age of the picnic. You had wine, tea, spirits, proper cutlery, and crockery. You had picnic condiments that were seen as a must that, more than likely would not be given a second thought in today’s spreads. Every single item in that picnic basket had a reason, no matter how trivial, to be there.

I will leave you with dispelling one story that has seemed to attach itself to the picnic folklore. You will hear people state, quite matter of factly, that the origins of the word picnic come from the times of slavery and lynchings. Now, if you do find some historical pictures of lynchings, you can see in the background families with picnic baskets.

And if you were really trying to stretch this story you could see how some people thought the word picnic sounded similar to picking negroes for a lynching but I’m afraid it’s just not true.

In the text above you will find the true meaning and origin of the word picnic. This proves it to be a modern-day urban legend. Originating from an email in 1989, the email supposes to have come from the Smithsonian. But it transpires that it originates from a public relations officer in the Field Museum, Chicago. Case closed!

Origin of Picnic – Where did the word picnic come from