If you are on a diet, you might want to look away – things are about to get crazy. We’re taking a look at the infamous Luther Burger, sometimes better known as the donut burger. It is a culinary concoction of epic proportions that has many people wondering – just because you can, should you? Well, the answer is a resounding YES. It may sound a little unbelievable, but a burger with donuts for buns is the best thing since, well, sliced bread. 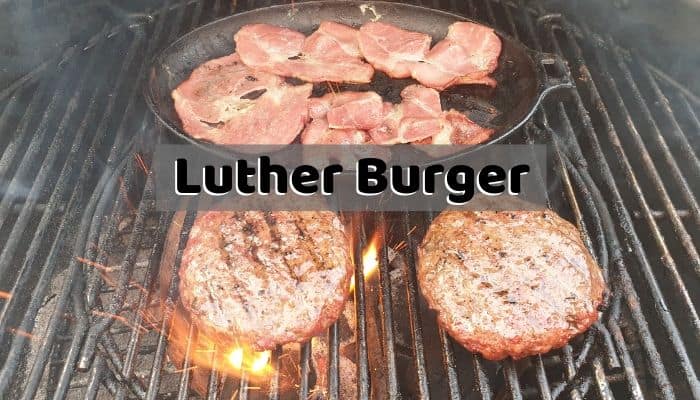 How to Make a Luther Burger

Variations of the Luther Burger

The Luther Burger in its original form is already considered pretty crazy, but it seems people are always up to the challenge of making it even crazier. You will see all different kinds of variations on the Luther Burger. Some people prefer two donut buns rather than one. Some want those donuts deep-fried while others prefer toasted. You will also see a wide assortment of extra ingredients, such as lettuce, tomato, mayo, or other traditional burger toppings. There are also often meat substitutions, like using turkey bacon or a vegetarian burger patty.

Our favorite way to switch up the flavor of the Luther Burger is to forego the cast iron pan for a charcoal grill. It may take a little more time than the traditional method, but a chimney starter can help you get your charcoals blazing hot in hardly any time at all. We think it’s worth it for the delicious burger flavor you can only achieve from cooking a patty over hot charcoal.

At the ballpark of the Gateway Grizzlies in Sauget, Illinois, they serve a version of the Luther Burger that’s often referred to as a “cardiologist’s worst nightmare”. It is almost a thousand calories and uses deep-fried Krispy Kreme donuts in addition to a 100% all-beef black Angus patty. They top the burger with melted cheese and two thick slices of bacon. It’s one of the most popular attractions at the baseball team’s home games.

Several variations of the Luther Burger also like to make appearances around the country at state fairs. At the Wisconsin State Fair in 2010, a variation was sold that used a ¼ pound Angus beef burger, Wisconsin cheddar cheese, a toasted Krispy Kreme donut bun, and two strips of bacon covered in chocolate.

If it tells you anything about what you can expect from the nutritional value of a Luther Burger – a donut burger at the Mississippi State fair had reasonably healthy toppings – “lettuce, tomato and a generous slice of raw onion”. However, it also packed in an estimated 1,500 calories. An average person consumes between 2,000-2,500 calories per day.

Planning your next bbq party? If you plan on serving Luther Burgers to your most adventurous friends and family members, they shouldn’t plan on eating too much more. Luther Burgers generally run between 800-1,500 calories. Not the healthiest of options, but one that will certainly have all of your friends talking. Besides, if you want to chow down on a burger made with donuts for buns, calories are likely the least of your concerns. Just be sure to keep some napkins handy for all of that delicious, sugary glaze and the delightful mess that is the Luther Burger.

As an Amazon Associate I earn from qualifying purchases.
Skip to Recipe