When you think of bagels you most likely think of your local deli with an amazing array of topping options. Not many people’s first thought would be of a burger as that just sounds crazy. But bagel burgers are amazing, and we hope to show you it’s not crazy to combine a burger patty with a bagel bun with our fantastic cream cheese bagel burger recipe. 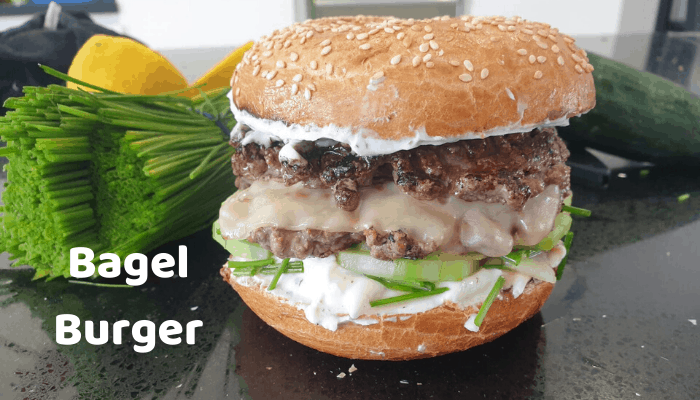 My version of the bagel burger is super easy, but you’ll see from the bagel burger alternatives section at the bottom of this article that you can make this burger as easy or difficult as you like. As long as you have a bagel as the bun you can call your creation a bagel burger. There are no hard and fixed rules so be as creative as you like.

I’m a big fan of a bagel and lox, so for my bagel burger, I had to have cream cheese. And if you’ve ever had cream cheese in a bagel you’ll know you’ll now also need a ton of napkins. This is a messy burger. One of the few burgers that I often cut in half before eating as this makes it easier to eat.

The only other ingredients you need other than a bagel to make a bagel burger is a burger patty. For my version, we’ll be making double smash burgers of 2oz each. These burgers will be separated by a slice of melted gouda cheese.

Having lashings of cream cheese and two smash burgers doesn’t leave you with much room for extra toppings. But I want a nice fresh summer taste for this burger so I’ll be adding some skinned and deseeded cucumber and a sprinkle of fresh chives. 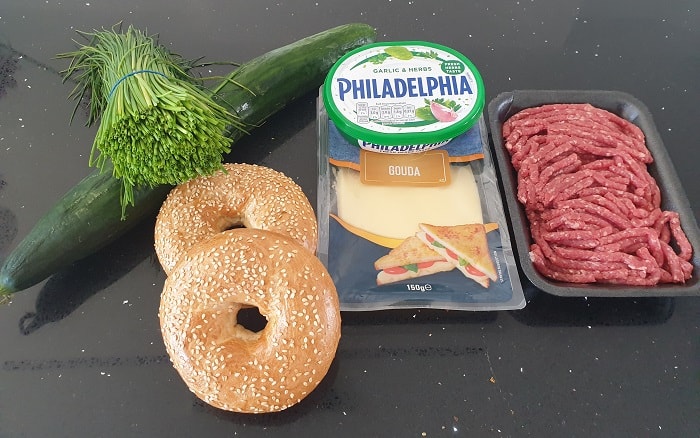 As with all the burger recipes we cover on Go Shindig we try to do as much as we can on our kettle grill. This is because we are an outdoor entertaining blog, and kettle grills are the most popular backyard grill in homes around America.

As we will be making smash burgers for the bagel burger we will be using the Weber Gourmet BBQ System griddle for the patties and the Lodge grill press to smash them. Other than a knife, you’ll need nothing else – we recommend the Dalstong chef knife if you are looking to buy one.

First, you have to fire up your grill. If you are using a kettle grill like us, you should place your charcoal baskets underneath the griddle, as you want this to be extremely hot. Depending on whether you are using a charcoal chimney or not this shouldn’t take longer than 20 minutes. We will be using briquettes as our fuel.

Smash burgers are extremely fast to cook, so when doing smash burger I always recommend preparing your buns first – or in this case your bagels first. Cut your bagels in half and place them on the grill for toasting. I normally spread a thin layer of mayonnaise on my bagel before toasting. You can use butter, olive oil, or nothing, but I’d say you should experiment to see what toasts a bun/bagel the way you prefer.

Your bagel will only take a couple of minutes to toast and once it is at your desired level you should dress it before grilling the burgers. Spread cream cheese on both the top and bottom halves of the bagel. Then add the cucumber and chives to the bottom half.

Now it’s time for the most important part – grilling the burgers. Divide your 4oz of minced meat into 2 equal-sized balls. Place the balls about 2-3 inches apart on the griddle and squash them flat with your grill press. It will normally take about a minute to get nice and crispy on the first side. Flip the patties and cook the second side for about 30 seconds. Place the Gouda cheese slice on one of the burgers and stack the second burger on top. Wait a few seconds for the cheese to start melting and then transfer the burger stack to your bagel.

There is no classic formula when it comes to bagel burgers so you can get as creative as you like. All you need to be able to call it a bagel burger is a bagel and a burger.

The burger – We have gone for smash burgers in our bagel burger mainly because they are my favorite. But you can easily swap out the double smash burger for a single thick patty. And regular bagels are vegan, so if you want you can swap the beef and cheese out for more vegan-friendly alternatives. Our falafel burger would work really well on a bagel.

The Bagel – We have used a sesame seed bagel for our burger but I’d say you should choose the bagel you like most. I have tried several bagels with the ingredients I have listed above and they all worked really well – even the blueberry bagel.

Cheese – There is a lot of cheese on this burger, and cream cheese on a firm bagel will make it really messy. So you might want to just go with the slice between the burger and replace the cream cheese with some other toppings. We have listed some great cheese to add to your burger if you want to swap out the Gouda.

Toppings – You can go crazy here, nothing is off-limits. Bacon, you can’t go wrong with adding bacon. Also, check out our best onion for burgers guide if you want to add some onion to the bagel burger. My only tip here would be not to go for something like a raw salsa or other finely chopped toppings as they fall out a lot easier with a bagel.

Bagel Burger – When a Deli and a Dinner Collide

As an Amazon Associate I earn from qualifying purchases.
Skip to Recipe