Skip to content
Last Updated September 18, 2022
GoShindig is reader-supported. When you buy through links on our site, we may earn an affiliate commission. Learn more

Classic BBQ food like chicken, or any poultry for that matter, or picanha steak is unrivaled when done on a rotisserie. You simply can’t beat the taste or juiciness of rotisserie cooking. And this is the reason why a rotisserie is one of the most popular grill accessories among backyard pitmasters.

So I love rotisserie food, as does everyone else, but one thing everyone hates about cooking on a rotisserie is having to constantly check the internal temps with an instant-read thermometer. Or worse, simply guessing the temps and hoping no one gets food poisoning. Thankfully these aren’t our only two options, with a probe thermometer I’m going to show you how to use a thermometer on a rotisserie without getting your wires wrapped around the spit and damaging your thermometer’s base unit.

I’m going to keep the expensive option short, one reason is that it doesn’t take much explaining, and the other is I think everyone is reading this article because they want to know how to use a standard dual-probe thermometer on a rotisserie. One with wires connected to a transmitter that sends the temp data to your phone or a receiver unit. 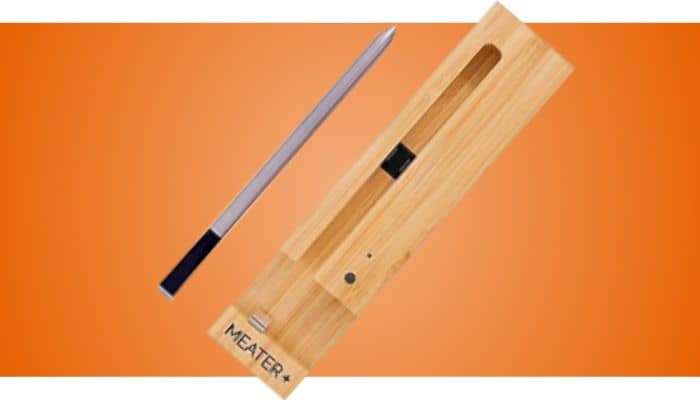 I think it’s best I explain a couple of terms here, as this is a little confusing. When a thermometer is described as being wireless this doesn’t actually mean it has no wires. The vast majority of wireless thermometers do have wires. What being wireless means is that some tech, like WiFi, Bluetooth, or radio frequency is used to transmit data from a transmitter to a receiver without using wires. But the transmitter will often have wires leading to the probes of the thermometer.

Not sure if I have cleared things up or made things more confusing. But what you do need to know is that a single probe no-wires wireless thermometer can cost you approximately double the price of a quality 4-probe thermometer from a respected brand.

I’m calling this the cheap option as I assume you already have a dual probe thermometer. If this is the case you’ll only need to spend about 10 bucks to be able to use it with your rotisserie.

However, if you don’t already have a dual probe thermometer the cost of this method will vary massively depending on the thermometer you choose to buy. You can easily get great older thermometer models for under $30 all the way up to the latest and greatest versions in the $200 plus range. At which point you might want to consider the option I described as expensive.

I’m going to demonstrate the technique of using a thermometer on a rotisserie with the ThermoPro TP930 thermometer. This is a middle-of-the-road thermometer, but one I think offers great value. It has four probes you can use when doing standard BBQ and has 500ft of Bluetooth range. If you are interested in this thermometer then check our full ThermoPro TP930 review.

So what are you going to be spending your 10 bucks on? It’s a little gadget called a spit rod bushing. This device’s primary function is to help with the secure rotation of the spit rod. But some genius pitmaster, whose name I don’t know so can’t give credit to, realized this tiny gadget could also solve the problem of using a thermometer on a rotisserie. 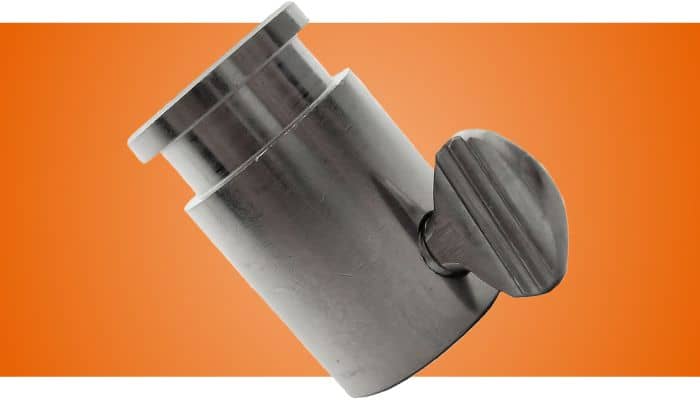 The main issue to overcome when trying to use a thermometer with a rotisserie is to have the wire spin with the spit. This problem is hard to overcome as the wire will get trapped a the point where the spit rests on the grill. This is the problem the spit rod bushing solves.

You don’t have to be a DIY guru to fit the spit rod bushing. Thread your thermometer probe through the bushing and then slide it onto the rod. Stopping at the point where the spit would touch the grill. Now tighten the bushing. This first step really is that simple.

So the wire now safely rotates with the spit, but unless you have a very loose probe jack that will spin along with it you’ll need to attach the thermometer to the part of the spit that juts out of the grill.

Attaching the thermometer will be different depending on the rotisserie you own. Some spits will have a handle on the none motor end of the rod, which will make this next step even easier. But many will not have this so an extra bit of work will be needed.

The reason a handle helps is it acts as a heat deflector. The spit is made of metal, which is a good heat conductor so heat will travel along the whole rod. Which could melt the plastic on your thermometer. Meaning it’s best to fashion a makeshift heat deflector if you don’t have a handle.

There are a million and one ways you can do this but I’ll show two methods I’ve used. A piece of BBQ gear most people reading this will own is a pair of heat-resistant gloves. I have an old pair I use for dirtier jobs, and they also work really well wrapped around the spit to be a heat deflector. I’d guess an old dish cloth would work just as well if you don’t have a heat-resistant glove.

Another method I’ve used, and I’m sure everyone can do it as the material will be found lying around the house, is to use some cardboard wrapped around the spit. This is a better option if you want a little extra length on the rod.

Once you have attached a heat deflector you can use rubber bands, string, or tape to secure the thermometer to the spit so that it rotates with everything else.

When using a rotisserie, it’s best to keep the weight of the food disbursed evenly around the spit. Obviously, you can’t do this with your thermometer, so if you can, use a small thermometer. I get that most people will not have multiple thermometers from which to choose, but if you do, choose the smaller one.

If you only have a large thermometer you could find your rotisserie rotates better if you also offset the thermometer weight with a spit counterbalance. I’ve added a link below if you want to buy one of these. 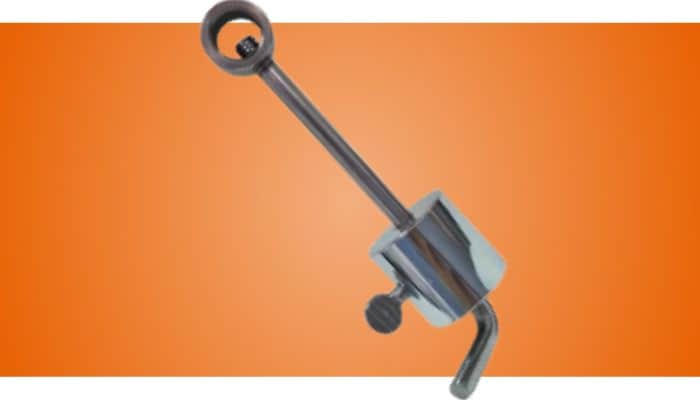 Be careful of the size of spit rod bushing you buy. I made a mistake with the first one I bought, I have a very small opening for my spit rod, and the bushing was too big and didn’t fit. The difference between the one that did fit and the one that didn’t fit was only a couple of millimeters. The one that worked for me was designed to fit 8mm square rods.

If money is no object for you then knock yourself out and go buy the Meater Block unit with four probes. It’ll set you back more than a Weber kettle grill but you will have one of the best thermometers on the market.

For the 99% of you where money is an issue, I’d say buy the spit rod bushing. Yes, there is still a tiny risk the wire gets trapped, but it has never happened to me, and I’d say the risk to reward is worth it. As with most things around the BBQ I’m sure as long as you don’t do it completely drunk everything will work fine.

How to use a Thermometer on a Rotisserie